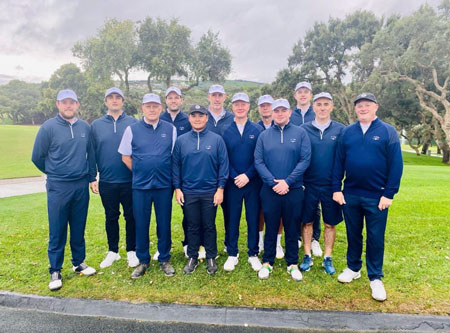 SOTOGRANDE, SPAIN – The 2022 Concession Cup officially teed off on Wednesday, November 16 with Four-Ball Matches in Spain at Real Club Valderrama. The Concession Cup follows the format of the Ryder Cup, with a twelve-man team from Europe competing against twelve men from the United States. This year’s event marks the first time the event is playing outside of the United States and with the inclusion of players from continental Europe. It is quite clear that Tore Sviland, the European Captain, and his assistant captains have done their homework in selecting their competitors. Numerous European Champions, the two finalists from the US Mid-Amateur, and several Senior Champions from multiple countries are all sporting the European team uniform this week.

The United States pair of Evan Beck, of Virginia, and Joseph Deraney, of Mississippi, surged on the back nine to beat European teammates Matthew McClean and Hugh Foley, both from Ireland. The US Mid-Amateurs closed out the match on the 17th hole to win 3 & 1, coming back from down one on the third hole. Both teams played consistently throughout the round, matching each other’s pars and birdies to keep the match close on the front nine. The momentum shifted for the Americans, with a birdie on the par-4 eighth hole followed by an eagle on the par-5 twelfth hole. Prior to the Concession Cup, McClean and Foley were the finalists in the 2022 US Mid-Amateur Championship, with McClean beating his fellow countryman 3 & 1 in the final.

The United States players of Doug Hanzel and Bob Royak also prevailed over the European players of Trevor Foster and Jody Fanagan. The US Seniors took the lead on the second hole with a birdie by Royak but didn’t finish out the match over the European Seniors until the 17th hole to win the match 2 & 1. The Europeans keep the match close, only allowing the Americans to go up two holes at their largest margin. Both senior team’s team members fed off each other’s play, making shots when needed. The team of Hanzel and Royak are very familiar with each other, as both live in Georgia and frequently compete in the same competitions. The team of Foster, of England, and Fanagan, of Ireland, were not as familiar with each other, but worked well together during the round.

Match three pitted Americans Scott Turner and Brad Nurski against Moises Cobo from Spain and Leon Breimer of Germany. The match was close through hole seven with the Europeans holding onto a slim one-up lead. The final two holes of the front nine were won by the Europeans and they turned at 3 up. The Americans made a birdie at the 10th hole to cut into the lead, but ultimately lost the next three holes losing the match 5 & 4.

Another win from the Europeans came from Caolon Rafferty from Ireland and Gregoire Schoeb from France as they faced Americans Tug Maude and Matt Mattare. Scoring on the front nine was close with the Europeans holding a one-up lead at the turn. A birdie on the eleventh hole by Rafferty, followed by a par on the par-3 fifteenth hole, and a birdie on hole 16 closed out the match for the European squad winning 4 & 2.

In the fifth match, Martin Birkolz and Mattias Pernheden, representing the Seniors on the European Team, took the lead early and never looked back as they won over the Senior United States team of Mike McCoy and Robert Funk. The Europeans grabbed the early lead on the second hole with a birdie and finished the match on the 13th hole to put a whole point on the board for Team Europe with a 6 & 5 victory. The team of Pernheden, of Sweden, and Birkolz, of Germany, combined to shoot 4-under 31 on the front nine, while the team of McCoy, of Iowa, and Funk, of California, shot a one-over 36. The Americans couldn’t seem to find their rhythm while the Europeans couldn’t be stopped.

The final match of the day had senior players Rusty Strawn and Mather Sughrue taking on the European duo of Rupert Kellock and Stephen Jenson. The first five holes presented a ball striking exhibition with most fairways hit and two putts to make birdie by both teams. The first birdie putt fell on the par-3 sixth hole by the Europeans only to be matched by the Americans. The lone bogey of the day was made by the Americans on the seventh hole, but they managed birdie on the ninth to make the turn at all square. The match remained even through the 14th hole. On hole 15, the Europeans both hit wonderful shots on the 197-yard par 3, Sughrue almost rolled in a 30-footer for birdie, but Stephen Jenson made his 10-footer to take a one-up lead. On the par-5 17th hole it looked like the Americans might even the match with two brilliantly played third shots to inside 10 feet. Jensen was the lone European on the green and calmly rolled in a 12-footer for his birdie that forced the Americans to make their putt to keep that match going. Sughrue drilled his putt, and the match came down to the 18th hole. Pars were made both sides, but the Europeans took home the one-up victory.

At the end of the day, the Europeans lead with a score of 4-2 overall. Tomorrow’s Foursomes matches will again offer up six points in alternate shot. Valderrama’s challenging course and the foursome’s format will no doubt provide a stern test for the world’s best amateur players.

None of this would be possible without our title sponsor, Golf Genius, and the support from golfs governing bodies; the USGA and R&A for their efforts in promoting amateur golf around the world.