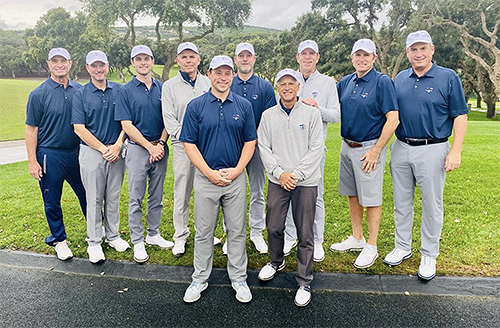 SOTOGRANDE, SPAIN – In what might be one of golf’s greatest comebacks, the USA entered the final 12 singles matches down 8.5 to 3.5 after many Americans had not played at the top of their game. Captain Danny Yates, along with his assistants Alan Fadel, Bryan Norton, and Robert Gerwin, decided on a strategy that sent out the players playing the best to set the tone and hopefully cut into the lead. This strategy proved well and early in the matches the top of the leaderboard favored the USA. However, as players got further into the round things started to even out amongst the two teams. The back nine was pivotal for Team USA as they turned several matches and took the lead in others that had been close. Mike McCoy, recently named Walker Cup Captain, entered the final hole even after a bogey at 17th, then made a 15-foot birdie putt to secure the win in his match against Ruppert Kellock. By late afternoon the top of the leaderboard was dominated in red, and the feel of a great comeback was unfolding. Real Club Valderrama again proved to be a wonderful site for this prestigious amateur event and provided exceptional playing conditions, despite heavy rain that delayed the matches by 1.5 hours. The final score of USA 13, Europe 11 awarded the Concession Cup back Team USA.

The first match of the day saw two seasoned Senior’s battle for 17 holes. Doug Hanzel, of Georgia, and Stephen Jensen, of England, both very experienced players having competed and won many high-profile tournaments. Hanzel took the early lead on the first hole, winning the second as well, but Jensen brought it back to all-square at the turn and leading one-up after the 10th hole. The American won three of the last five holes to close the match on the 17th hole 2 & 1 to put the first point of the day on the board.

The second match of the day pitted two of the top WAGR ranked Mid-Amateurs in the world against each other, Evan Beck for the United States and Matthew McClean for Europe. It was all Beck, of Virginia, on the front nine, as he won four of the first 5 holes to go four-up and held that lead to the turn. McClean, of Ireland, tried his best to climb back winning three of the first five holes on the back nine to bring the match back to one-down. The American was able to close out the match on the 16th hole after winning 15 and 16 for a final score 3 & 2 to get the United States a full point.

Rusty Strawn of Team USA and Martin Birkolz of team Europe took their match to the 17th hole, where the American won 2 & 1. Birkolz, of Germany, took the early lead two-up after two holes, but Strawn, of Georgia, fought back winning four of the last five holes to finish the front nine two-up. Strawn won the 10th hole to go up three but lost three of the next four holes to be all square with the European after 14 holes. Strawn secured another full point for the United States after 17 holes as Birkolz couldn’t finish the hole.

The fourth match saw a very even match between the Mid-Amateurs Tug Maude of the United States and Caolan Rafferty of Europe. The lead was never larger than two-up for the American with the Irishman tying the match after the 13th and 17th holes. Rafferty is very familiar with international competition, having played in the Walker Cup, Palmer Cup, and the European Team Championship, but was not able to win the match. Eleven of the eighteen holes were split in the match, with Tug, of Georgia, edging out Rafferty on the 18th hole to win one-up.

United States Senior Mike McCoy surged late to beat Europe’s Senior, Rupert Kellock. McCoy, of Iowa, closed the match on the 18th hole with a birdie to win one-up over England’s Kellock. The match saw numerous lead changes, with the largest margin of two-up for Kellock. McCoy won four and halved three holes on the back nine to get the match to all square heading into the final hole. The American then dropped in a birdie from 15 feet to get the United States team a much-needed full point.

Meanwhile, United States Mid-Amateur Joseph Deraney and European Mid-Amateur Hugh Foley split their match and points on the 18th hole. Foley, of Ireland, took the early lead going four-up after the seventh hole, as Deraney, of Mississippi, struggled. The American seemed to find a second life and battled back to tie the match after the 14th hole. The Irishman went one-down on the 17th hole, as Deraney birdie the hole, but finished the match at all square by winning the 18th hole.

In the seventh match, seniors Bob Royal (USA) and Jody Fanagan (Europe) were pitted against each other. The match started with Fanagan jumping out to a 2-up through 4. Royak cut into the lead with a win on hole 7 to turn at 1 down. Bob Royak won two of the next three holes before closing out the match with a birdie on the 15th and an eagle on 16 to win 3&2.

Mid-Ams Scott Turner (USA) and Gregorie Schoeb (Europe) were paired for match eight. Schoeb’s fast start with two early birdies gave him a five-up lead through 6 holes. Turner struggled to make a dent the lead and the momentum of Schoeb’s solid play gave him a 6&5 win.

Match 9 Seniors Matt Sughrue and Mattias Pernheden teed off as players who both wanted to make a point. Sughrue’s consistent play through the front 9 at even par gave him a 3- up lead and with wins at holes 11 &12, he never looked back and posted a 5&4 victor.

At this point in the afternoon the tide was seemly turning in the US’s favor.

One of the final three matches started fast with Brad Nurski (USA) winning the first two holes in his match against Leon Breimer (Europe) and made the turn at 3 up. Leon caught fire with two birdies and a par to tie the match on hole 16. Nurski made a solid par on the treacherous 17th to win the hole and take a 1 up lead going to 18. A par 4 tied the hole and gave the USA the winning point that secured the Cup coming back to the United States of America.

Robert Funk (USA) teed it up against Trevor Foster (Europe). Foster brought his own fan club with over twenty friends from his home club in England cheering him on. It obviously made a difference as he built a demanding 4 up lead at the turn. Funk continued to rally, but in the end, Foster made some pars and won the match 2&1.

The final match of Mid-Ams Moises Cobo (Europe) and Matt Mattare (USA) served as the anchor roll for both teams. At various points during the day their match might not make a difference, but as the day went on it started to look like it might determine the outcome. Making the turn at even, Mattare started to pull ahead with wins on holes 12 &13 giving him a 2-up lead. Moises made a wonderful par from the fairway bunker on 17 to take the match to the 18th hole. Both players made pars and Mattare walked away with a 1 up win.